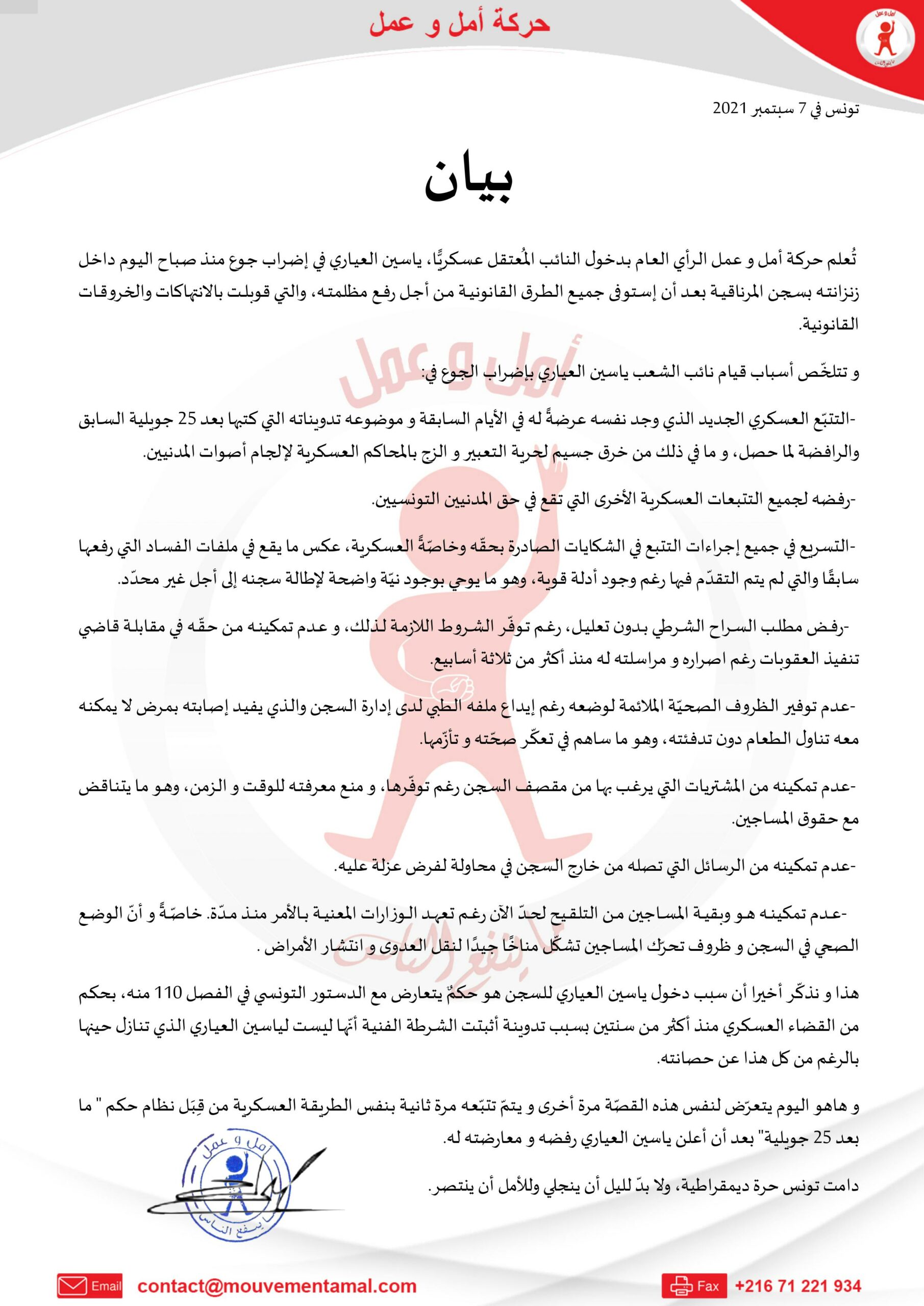 The movement Amal wa Aamal (translated hope and work) informs the public opinion that the detained Tunisian MP, Yassine Ayari, has started a hunger strike since September 7th, inside his cell in Mornaguia jail, after full exploittion of all legal steps in order to file for the probational suspension of his sentence, which was met with infringement and legal violations.

The main reasons of this hunger strike is summed up below:

-The new military trial that he should face in the next few days, for post-“July 25th” publications on Facebook, expressing his disagreement with the latest political infractions that happened, and what a grave breach of freedom of expression it is to misuse military courts to curtail the voices of civilians.

-His rejection to all practices of the military prosecution against Tunisian civilians.

-The speeding up of all prosecution procedures issued against him, especially the military ones, contrary to what happened with the corruption files he previously unveiled, which have not been advanced despite the presence of strong evidence, which suggests a clear intention to prolong his imprisonment for an indefinite period.

The refuse of his request for probation release without justification, despite the availability of the necessary conditions to approve it, moreover not enabling him to meet with the enforcement judge despite his insistence and correspondence with him for more than three weeks.

The lack of adequate health conditions despite his medical record being deposited at the prison administration, which states that he has a disease requiring him to only eat warmed up meals, which did not happen, and so, contributed to the deterioration of his health condition.

Not being able to make specific purchases from the prison canteen despite its availability, and preventing him from knowing the date and time, which contradicts the rights of prisoners.

Not enabling him to receive messages from outside the prison in an attempt to impose isolation on him.

-He and the rest of prisoners have not been able to get vaccinated so far, despite the commitment of the concerned ministries. Especially since the health situation in the prison and the conditions for the movement of prisoners form a good environment for the transmission and the spread of disease.

-Finally, we recall that the reason for Yassine Ayari’s imprisonment is a ruling that contradicts the Tunisian Constitution in chapter 110 of it, sentenced by a military court more than two years ago because of a post that the forensic police proved to be not Yassine Ayari’s, who at the time, despite all of this, waived his parlamentary immunity. And today he is exposed to the same story again and is being pursecuted again in the same military manner by the regime of “July 25th” after he announced his rejection and opposition to it.

May Tunisia always be free and democratic
The night must pass, and hope will triumph.